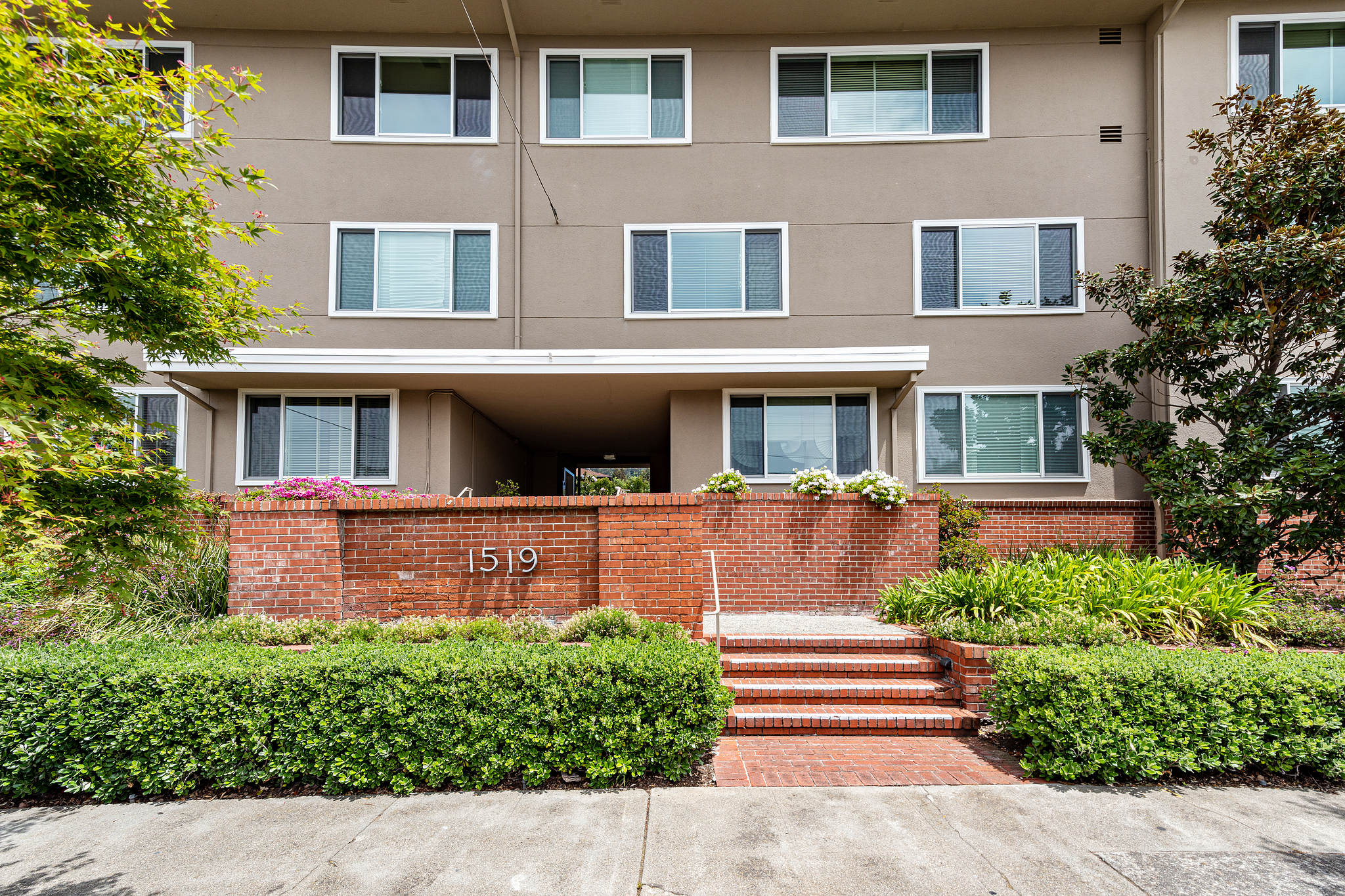 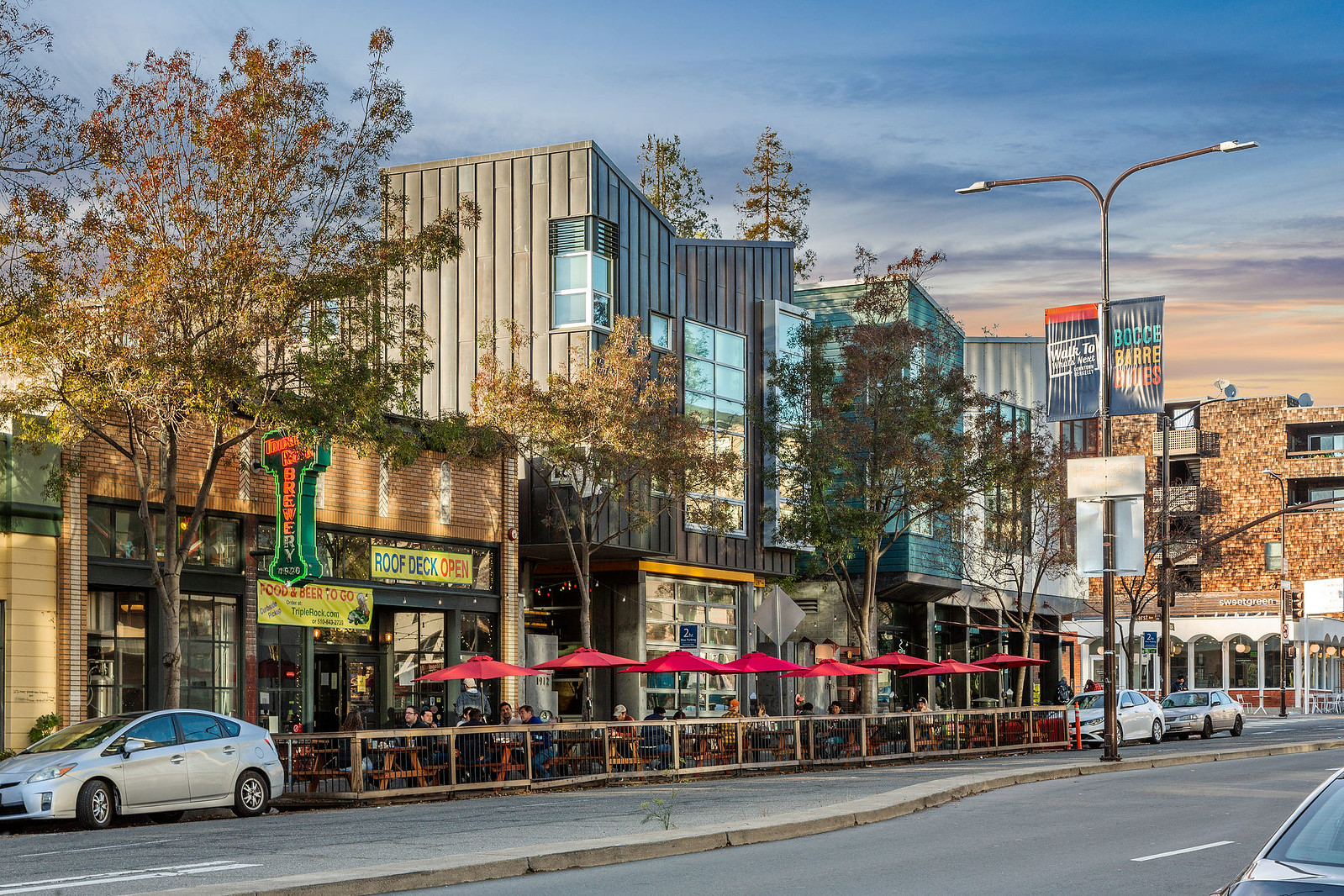 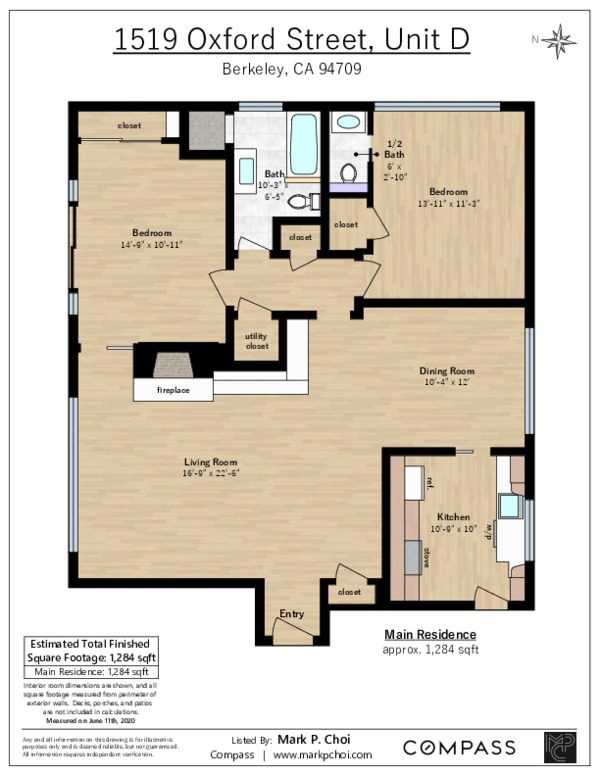 Set in a charming North Berkeley Co-Op, this 1,377-square foot gem affords the ability to live in a community of like-minded shareholders with equal stake in this Mid-Century beauty. A three-story, 11-unit building with elevator access, the stock cooperative maintains a harmonious environment of neighbors who feel a sense of joint ownership for the building.

Recently reimagined with a new roof and fresh interior paint, this first-floor, corner unit is tucked away in the rear southeast corner. Affording the luxury of no common walls, the two-bedroom, one-and-a-half-bathroom unit offers open floorplan anchored in refinished plank oak hardwood flooring and appointed with brand-new dual-pane Andersen windows and slider.

An expansive living room with brick fireplace is flanked by custom built-in shelving. Beyond a sunny dining area lies a remodeled kitchen with luxe, quartz countertops and sleek stainless-steel appliances. Illuminated with LED lighting throughout, the unit boasts a sunny primary suite with half bath and second bedroom with sliding doors that open to a secluded patio decked in flowering camellias. Featuring a upgraded full bath with striking tile, unit D includes a large storage closet and communal laundry with washer/dryer.

A unique community whose shared ownership comes with Ownership Shares, this special Co-Op incorporates a building insurance policy that includes earthquake coverage. Blocks to the Berkeley Rose Garden and tennis courts of Codornices Park, along with Gourmet Ghetto's Chez Panisse, Peet's Coffee, and Cheese Board Pizza, this coveted corner unit is near UC Berkeley, Downtown Berkeley, BART, buses, & Highways 80, 24, and 580 for convenient commutes.

This popular Berkeley neighborhood is known by at least a few names including Gourmet Gulch, North Shattuck and Gourmet Ghetto. Located less than a mile north of Downtown Berkeley, North Berkeley is often considered the birthplace and epicenter of California Cuisine. The homes in the North Berkeley neighborhood range from well-preserved Victorian-style homes to bungalows and meticulously preserved Craftsmans. In fact, the eclectic mix of real estate in this area garners so much attention, the Berkeley Architectural Heritage Association conducts regular neighborhood tours in the area. Thanks to the nearby BART Station and central shopping district, it is one of the most walkable neighborhoods in Berkeley.

Everything from Oakland to the bustling Downtown San Francisco area is less than an hour commute from North Berkeley. Oakland Medical Center is less than 20 minutes from the Downtown Berkeley BART Station and residents can be at Google’s headquarters in less than 45 minutes. UC Berkeley is a mile away.

Live Oak Park, located near Shattuck Avenue between Eunice and Rose Streets, is ideal for morning walks, outdoor sports and many other activities. Amenities include basketball courts, a volleyball court, lighted tennis courts, picnic areas, and an open-air theater which hosts children’s plays and Shakespearean productions. Just east of Live Oak Park is the Berkeley Art Center which hosts a variety of exhibits, art openings, and lectures.

Alice Kahn first used the phrase “Gourmet Ghetto” over 40 years ago and although the district has recently been renamed "North Shattuck," the historic strip of Shattuck Avenue between Cedar and Vine streets is anchored by Alice Waters’ world-famous Chez Panisse Restaurant & Café, The Cheese Board Collective, and the original Peet’s Coffee & Tea.